I looked up to infinity, where parallel lines converge,
and it vanished into the mist. 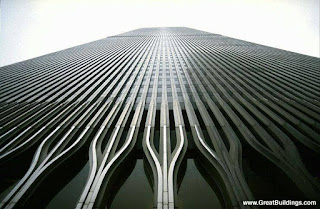 The two towers almost touched, as God's finger to Adam.
They drew me upward to the heavens.

CONCEPTION
I first saw the World Trade Center (WTC) in 1979 during a visit to my college sweetheart on Fire Island. (See last post) I had an undergraduate degree in architecture from the University of Washington, and was applying to graduate school that fall.  Coming from Chicago, the city that created the skyscraper, I had to see these new Tallest Buildings in the World. 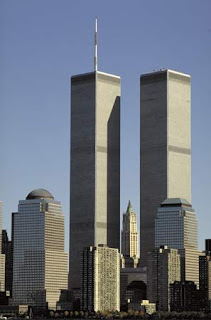 Minoru Yamasaki was selected to design the WTC in 1962.  He was born in Seattle, went to Garfield H.S., and earned his bachelors degree in Architecture from my alma mater.  He was a favorite son of Seattle after moving and establishing his practice in Detroit, MI (to avoid internment during World War II).  He left multiple legacies in Seattle:  The Rainier Tower, the IBM Tower, and the Pacific Science Center.  All share his modernist gothic motif with the WTC. 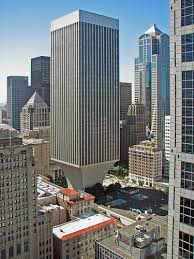 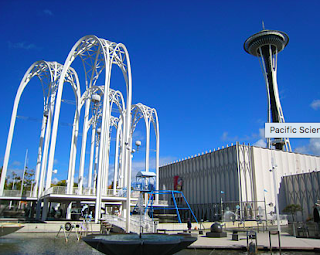 Pacific Science Center, Seattle
LIFE
The two WTC towers opened only six years previous in 1971 and 1973.  It was a vast complex of seven buildings developed on reclaimed land from the Hudson in collaboration among the states of New York and New Jersey, and PATH (Port Authority - Trans Hudson) among others. 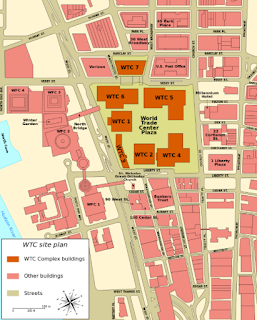 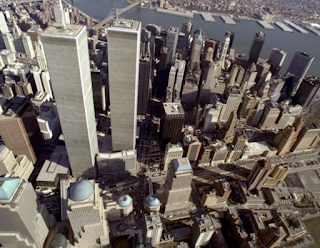 The design had several innovative features for the time.  It created elevator sky lobbies to increase floor efficiencies by stacking elevators thus using the same shaft space.  The floor framing spanned from the tube-framed exterior to the central core allowing an open floor plan, in contrast to traditional design that distributed columns throughout the interior.  The perimeter contained 59 column per side and was constructed with prefabricated modular steel frames each consisting of three columns, three stories tall, connected by spandrel plates.

The Exterior columns were only 18" apart, some say because Minoru was afraid of heights, others that it was to create a stiffer exterior because when the towers sway the vertical lines could reference the movement and make some people queasy.

The building had its detractors from the American Institute of Architects to critic Lewis Mumfor, who observed it looked like "the boxes that the Empire State Building and Chrysler Building came in".  The narrow office windows, framed by the deep tube structure, restricted views and were disliked by many.  Activist and sociologist Jan Jacobs also critiqued the plan for its use of the site, arguing that the waterfront should be kept open for New Yorkers to Enjoy.

None-the-less, the Towers were impressive in their height and elegant form.  Seen from all over NYC and beyond.  I remember being on Fire Island during that same trip and they could be seen over 40 miles away, silhouetted pair in the setting sun.

DEATH
The events of September 11, 2001 will be seared in our minds.   Like the Hindenburg bursting into flames over N.J. for our parents and the assassination of JFK in Dallas for the boomers, the WTC attack in NYC will be the afterimage for our children.  We all remember where we were and what we were doing.  Robin and the girls had just moved into my Phinney bungalow the week before. Furniture hadn't been realigned to accommodate three girls in the house.  Our TV was on a stand in the space next to the kitchen.  Before work, Robin was watching the morning news as I was still getting ready upstairs when I heard her cries to come down immediately.  When I did we all just stood there transfixed as the towers crumbled to the ground in a fountain of dust. 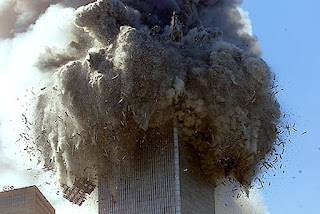 Fountain of dust in the collapse of WTC Tower
REMEMBERANCE
"The beginning of the end of War lies in Remembrance", Herman Wouk

All cultures have created memorials to their dead.  It's literally part of what defines us as human.  Millennia ago humans buried their dead in organized mounds.  Three thousand years ago we built pyramids to honor the departed and prepare them for the afterlife.  After all wars, great and small, regardless of who initiated or is at fault, all sides honor their dead.  And we should particularly remember the innocents - those beyond the reach of politics.  The Jews of the holocaust, the Muslims in Srebrenica, the children and office workers in Oklahoma. 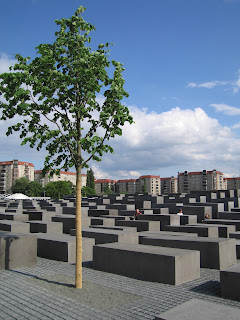 Memorial to the Murdered Jews in Berlin 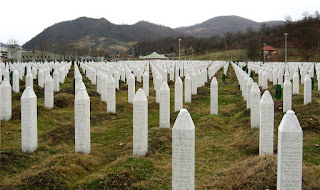 Memorail to the Genocide in Srebrenica 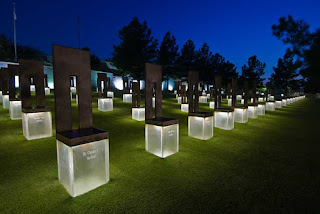 The years following the attack there was much debate and conflict about the economics of the land, the politics of financial responsibility, the emotions of victim's families, and the appropriateness of the design; which had to represent the losses from five different attacks (including the 1993 WTC attack), and different constituents (fire, police, port authority, employers, employees, occupants,  etc).  There continues to be ongoing debate about the construction and operational cost overruns for the foundation that built the memorial (which was not funded by taxes).

We were here on the 14th anniversary of 9/11 and in the morning watched on TV the annual reading of the names.  Over 3000 of them, periodically with poignant personal stories.  Later, that evening, we saw two blue streaks of light shining into the night sky and vanishing into the mist - a reminder of what was.  We were compelled to walk to them from our SoHo loft at 11:00 that night. 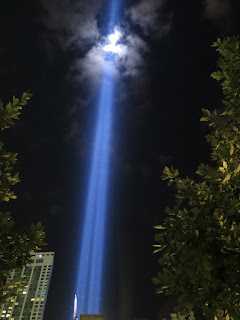 Shafts of blue light at the construction of a new tower.

Day or night the memorial is contemplative, evocative, and emotional.  It transcends politics and tragedy.  Two sunken, acre sized, fountains outline the footprint of each missing tower, and the void left for the family by each victim's absence.   Surrounding each fountain bronze rail-plates are engraved with the names of each person, grouped with their constituents, who died in the five attacks.  In the evening, light from below illuminates the their names creating an etherial after-image caught in the mind's eye. 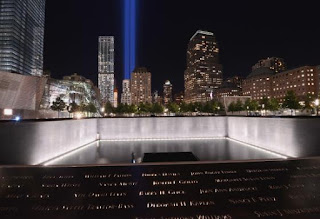 Still, calm, reflective water beneath the bronze rails imperceptibly flows to plummet 33' over a ribbed edge creating a cascade of shimmering ethereal white into the basin below; as we all plummeted from our daily life into grappling with the tumult and loss of what happened - to the victims, our lives, and the world.  In the large pool below, the water settles again as we reach reconciliation before disappearing into a bottomless void, "from whom no traveler returns".

REBIRTH
I've been to the site probably half a dozen times since 9/11.  From the stench in the immediate aftermath of the attack, to the clearing of the rubble, to the nascent outlines of what may be.  Besides the location of the memorial, the winning Master Plan designed by Daniel Liebskein envisioned seven crystalline towers surrounding the open space. 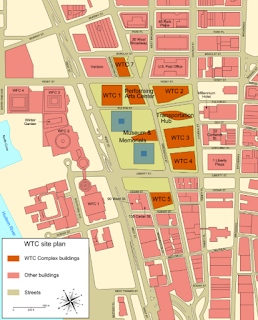 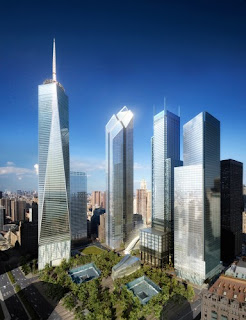 Each tower is fractured and fragmented in reflective glass, not a thing, but a disjointed mirror of the empty space left by the towers - and the people. 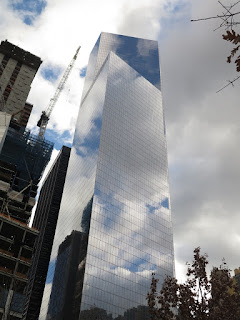 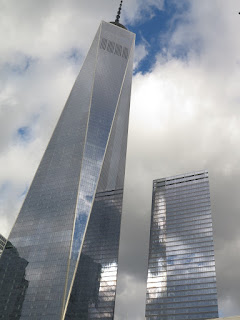 Reflections of the Void

I find in the rebirth that to gaze up the new One World Tower, parallel lines still converge, and draw me to the heavens.  We carry on. 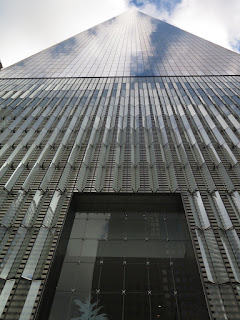